Python is an interpreted, object-oriented, high-level programming language with dynamic semantics. Its high-level built-in data structures, combined with dynamic typing and dynamic binding, make it very attractive for Rapid Application Development, as well as for use as a scripting or glue language to connect existing components together.

In this lab, we will be looking at some more concepts around scripting with Python. Python is a good coding language to learn as its syntax is very simple and straightforward. Python is also very versatile and can import massive amounts of code from libraries, shortening the workload on developers.

We will begin by talking about functions. Functions are like blocks of code which are executed together. Functions make it easier to use the output of the function in another statement instead of having to write all of the lines of code again. For example, say we have a complex formula to calculate a sum. If we want to include the output of this complex formula in another sum, we can simply call the function instead of re-writing all of the lines of code again.

In the Python language, functions are known as definitions. Let’s create one now. Create a new script and edit its contents so that the script looks like the following: 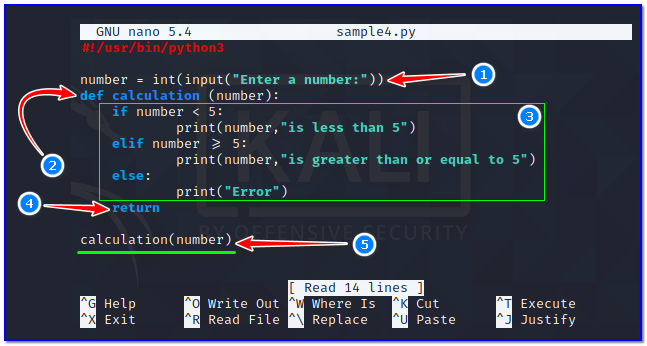 Let’s break down what this script is doing. 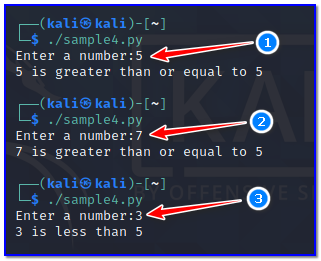 Save this script and execute it in the usual fashion. Enter some random numbers when prompted, and note the different responses you receive.

We will now touch on parameters. Notice how we passed the value of the number variable to the definition calculation? This number variable is called a parameter. Since we passed the parameter to the definition function when we created it, it will be expecting this value when it is called. Note that the number parameter is merely there for accessing the data within the function, and that parameters and variable names don’t have to match.

Have a look at the screenshot below:

Create your script so that it looks like the above, save it, make it executable, then run.

Let’s look at introducing some of the logic operators we learned about in the previous lab. These are very useful to include in if statements as they can provide much more functionality to the statement. Typical login statements include and, or, not. These can be used in conjunction with if statements to provide the statement with an extra condition which needs to be met in order for the statement to be true. For example, create another script so that it looks like the following:

For the second elif statement, the OR logic operator is used. This means that either statement in this line must be true for the code to execute. If neither are true, the code wil move onto the next if statement or else statement. 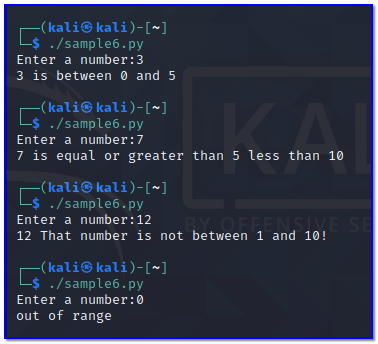 Save this as a new script and execute it. Experiment with entering different numbers when prompted and note the differences.