Bash is a Unix shell and command language. It is a free software replacement for the Bourne Again shell. It is used as the default login shell for most Linux distributions.

In this lab, we will run through some more advanced, but fundamental concepts behind bash scripting. Using these concepts when scripting with bash is what makes the language really useful.

We will begin by addressing conditionals. Conditionals are a piece of code which rely on a piece of code (a condition) being met. Whether the condition is met or not is usually determined using relational operators including: equal to, greater than, and less than.

To begin this lab, we will start by making a simple conditional statement to check if a variable is equal to a value. We will use an “if” statement to achieve this goal.

This is the syntax for every if statement in the bash language. If statements will always use a pair of brackets. When using bash, make sure to include a space between the brackets at either end in order for the command to work. We also need to ensure we end each if statement with fi, which is if backwards. Let’s construct an example: 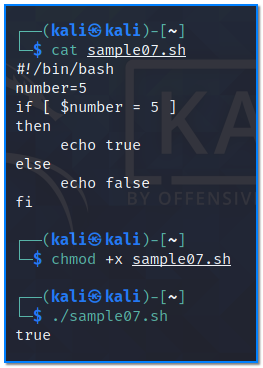 The following is what this looks like in a text editor:

We can execute this script and we will be returned the value “true”.

Now, let’s create a script which will accept input and compare it to a value. This will look like the following:

Save this script file as “sample08.sh”, make executable then run;

Enter a number and see how the script responds.

Save this script file as “sample09.sh”, making it executable.

Now, run this script and see what happens.

Conditional statements can be extremely useful for automating tasks on a Linux system, such as checking to see if the system is up to date, if we are connected to a network, etc. 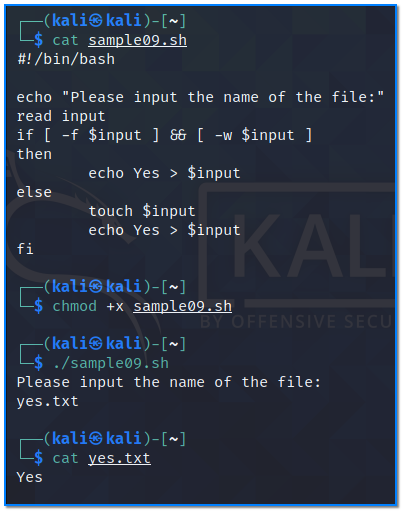