Lab 29 – How to connect to an internal network using OpenVPN

Learn how to use OpenVPN to connect to an internal network.

OpenVPN is an open-source VPN protocol and VPN software which enables us to establish secure VPN connections. It is a very secure protocol and is offered by most VPN providers for this reason. It works across multiple platforms, making it a versatile and useful tool.

You can use a Kali Linux VM for this lab. In this lab we need another Linux machine to make VPN connections through. You can find a prebuilt Ubuntu Server image on https://www.osboxes.org/ubuntu-server/ for this purpose.

Download and import to your virtualization platform and run.

Then we update the OpenVPN package:

This command will find the package with its dependent packages from repos on the internet and install it on the machine if the package is not installed. If there is an old version, it will find and install the most recent version. Let’s see which version installed on our Ubuntu VM:

Since following processes will require privileges, we will switch to root user.

OpenVPN’s settings files are located under the “/etc/openvpn” folder. There are two empty folders named “server” and “client” here. Since we will configure Ubuntu as a VPN server, we will create all our files under the “server” directory. Copy the text lines below in the grey box and paste them into the terminal screen of Ubuntu. Then, hit enter.

A new file named “server.conf” should have been created here. Let’s check the file content:

Let’s see what some of the lines do.

On the top line we see:

This is our server’s IP address. We will connect to this IP address via VPN from client machine.

The next two lines indicate the communication protocol and port number. This comes by default in a newly installed OpenVPN. This setting should be the same on both the server and the client.

The subnet information of our network, which will be established end-to-end as encrypted, is specified in the following lines:

By default, this subnet comes as 10.8.0.0/24, but if there is a subnet conflict in the current network, we can change it.

These two lines specifies the user and group that will owner the “OpenVPN” process.

This line shows the preferred mechanism for encryption. It should be the same on both the server and the client.

Indicates the TLS in this machine will be in server role.

An attribute that we require to see in the client certificate. Otherwise, we will be denied to connect our server.

Root certificate file. OpenVPN will use this as a reference to verify the client’s certificate signature. We will create this in our next lab.

The certificate and key pair OpenVPN will use when communicating with client. We will create it later.

OpenVPN will use this when encrypting and authenticating all control channel packets.

File containing Diffie Hellman parameters in pem format (required for tls-server only). We will not create such a file in this instance.

OpenVPN has many other parameters, but since explaining them one by one will be beyond the scope of this lab, we have only explained the most necessary ones.

In the previous task, we saw some external files in the config file. OpenVPN will not work until these are created. We will produce them in this mission.

Be sure we are working in this directory: “/etc/openvpn/server”

First, we must create a certificate and key file of Root Certificate Authority (Root CA). Copy and paste the text below into the terminal screen in one line:

You will be asked to enter a password twice. Set a strong password and write it down for future reference. We will use this password when signing server and client certificates later.

After a quick “openssl” command job, two files are created on same directory: ca.key and ca.crt. To get information about a certificate, use this command on the terminal screen:

Observe information areas. Our Root certificate is for 10 years. It has an encryption depth of 4096 bits. It takes more time to generate a higher bit depth certificate, but this gives us a harder key pair to crack. We will copy “ca.crt” file to the client to use openvpn operations.

Then, copy and paste the text below to terminal screen:

This will create a file named “x509-extensions.cnf”, which we will use later.

Let’s create a server certificate and key pair, and sign with our Root CA key. Copy and paste the text below to the terminal screen in one line:

Two files, named server.csr and server.key, will be created. Observe information in the server.csr file:

As you can see, there is no expiry date. Only bit depth is specified. The expiry date and any other property of the certificate are permanently determined by the Root CA. Now, let’s give this server.csr file to the Root CA for signing. Copy and paste the text below to the terminal screen in one line:

You will be prompted for a password for the root CA. Now, check the directory again. We have server.crt file now. Let’s check signing and other information which is embedded by Root CA: 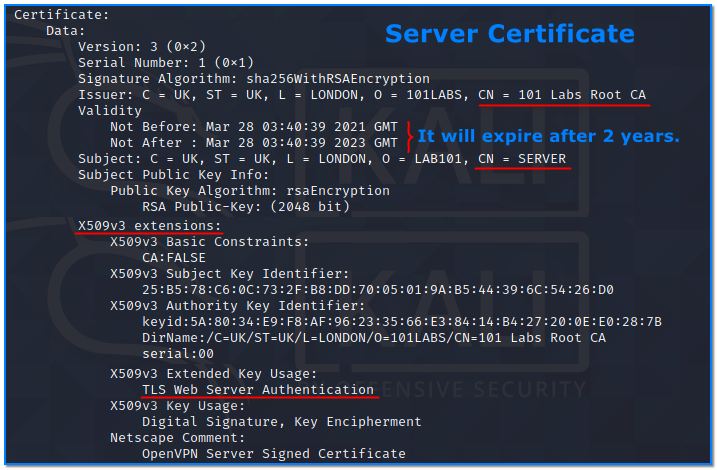 We see data similar to the root CA certificate. The parts that will be important during certificate validation are shown in colour in the figure. Note that “modulus” sections have been cropped to simplify the figure above.

Finally, it is time to generate the client certificate and let the Root CA approve it. Copy and paste the text below to the terminal screen in one line:

Two files, named client.csr and client.key, will be created. Then, give client.csr file to the Root CA for signing. Copy and paste the text below to terminal screen in one line:

Again, you will be prompted for a password for the root CA. Now, check the directory. We should have a client.crt file now. Let’s check signing and other information which is embedded by Root CA: 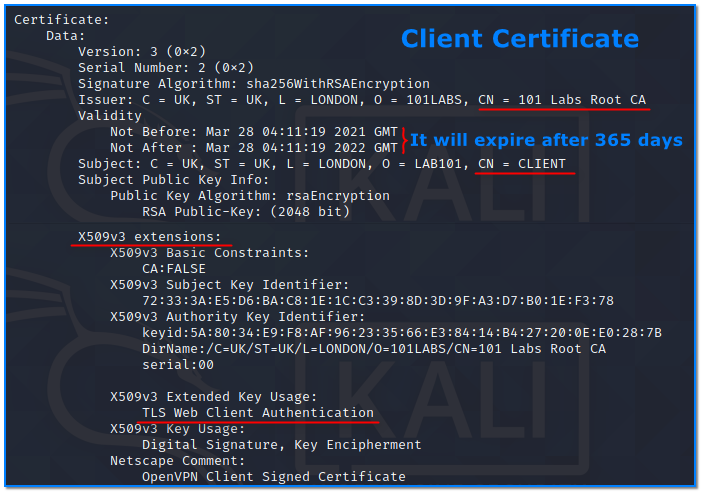 There is one file to be created in Ubuntu Server:

Copy and paste the command below to the terminal screen in one line:

Now, we have a “tc.key” file. Also, this file will be copied to the Kali Linux machine via a secure way.

What about the dh.pem file? Since we’ve configured all the certificates to use Elliptic Curve Cryptography, there is no need for a Diffie-Hellman seed file in this instance.

The server side of our OpenVPN installation is done!

Now, we will prepare the OpenVPN client which is Kali Linux. We will follow the steps similarly to how we followed them while preparing the server. Open a terminal screen in Kali VM, then type this command:

Since following processes will require privileges, we switch to “root” user. We must then be sure that openssl and openvpn packages have been installed with the most up-to-date versions in the client’s machine:

Remember, there are two empty directories in “/etc/openvpn”, named “server” and “client”, here. Since we will configure our Kali Linux machine as a VPN client, we will create all our files under the “client” directory. Copy the text lines below in the grey box and paste them into the terminal screen of Ubuntu. Then, hit enter:

See what some of the lines do:

On the top line, we see:

We will connect to this IP address or hostname given, via VPN from our Kali Linux machine. Port number and protocol type are placed at the end of the line.

Ensures it never gives up trying to connect to the server, and is useful for unreliable internet connections and laptops.

Tells openvpn to act as a client.

These two lines specify the user and group that will be the owner of the “openvpn” process.

This line shows the preferred mechanism for encryption. It should be the same on both the server and the client.

Indicates that the TLS in this machine will be in the client role.

Attribute that we require to see in the server certificate. Otherwise, we will be denied connection to the remote server.

The remaining parameters have been explained in Task 1.

Now, let’s copy the other files mentioned in the “client.conf” file to our Kali machine. The first is the “ca.crt” file, which we created in Task 1. We also created the client certificate and key pair in Task 4, and the tc.key file in Task5. We will send them all to our Kali machine with scp.

Start SSH service in the Kali machine with this command in the terminal:

Switch to the Ubuntu Linux machine’s terminal screen. Be sure we are in the “/etc/openvpn/server” directory, as our created files are left in there. Type these commands to transfer the files to the Kali machine:

All four files are transferred to the Kali machine in a secure way. Then, move the files to the “/etc/openvpn/client” directory in the Kali machine. Change ownership to root user and be sure they have proper access modes. As you can see, all our “key” files must be private except root user.

Since we have these certificates, the VPN server we will connect to will not ask for any other

The client side of our OpenVPN installation is done!

Now, time to connect the two machines with VPN. Switch to server machine (Ubuntu), type these commands on the terminal screen: 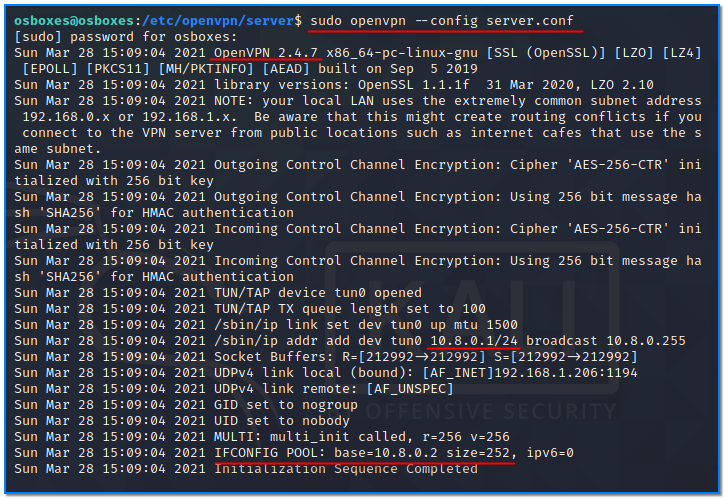 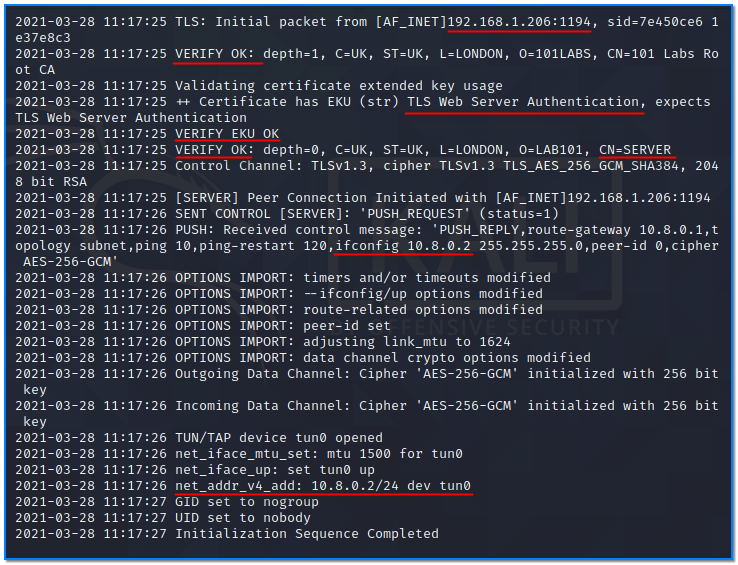 Our OpenVPN client has started successfully. 10.8.0.2 is our virtual IP address, which is attached to tun0 interface. Logs show that all certificates have been signed by authorized Root CA and has required attributes such as “TLS Web Server Authentication”. 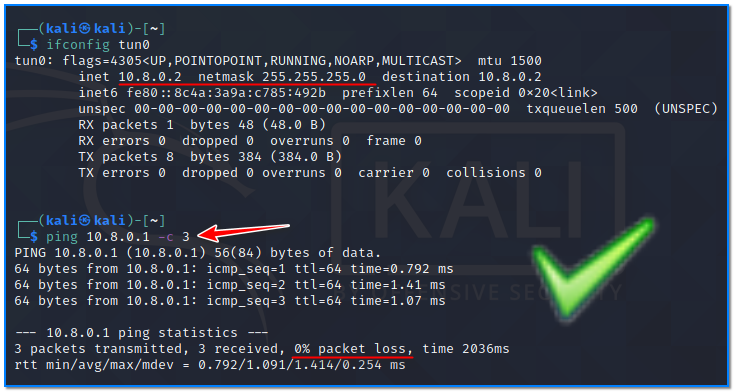 Now, try to ping the other side. Open a separate terminal screen, then type these commands:

After the connection is established, logs like the following are generated on the VPN server side: 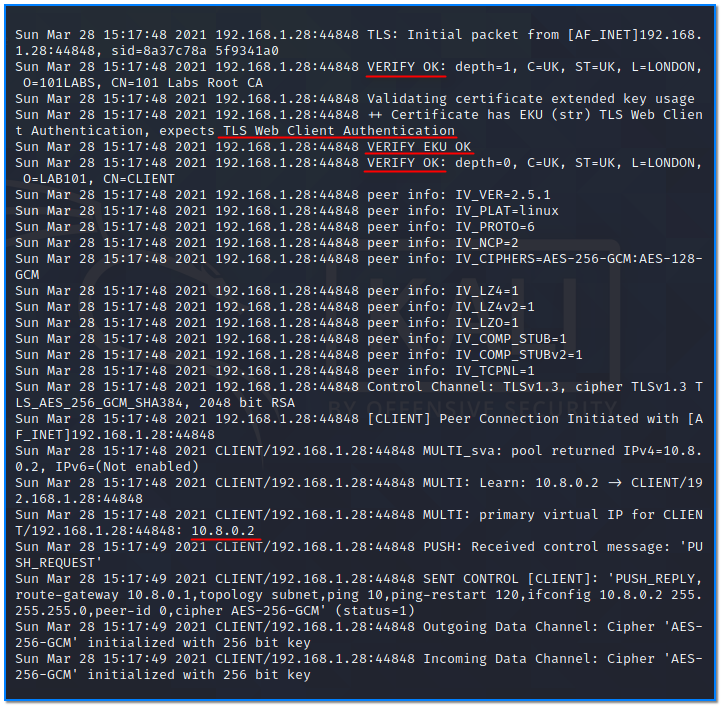 If connecting to an internal network, such as that of a hacking site like HackTheBox or TryHackMe, we will need an OpenVPN package file. Many VPN servers will provide the client.conf file specially prepared for their system for their convenience.